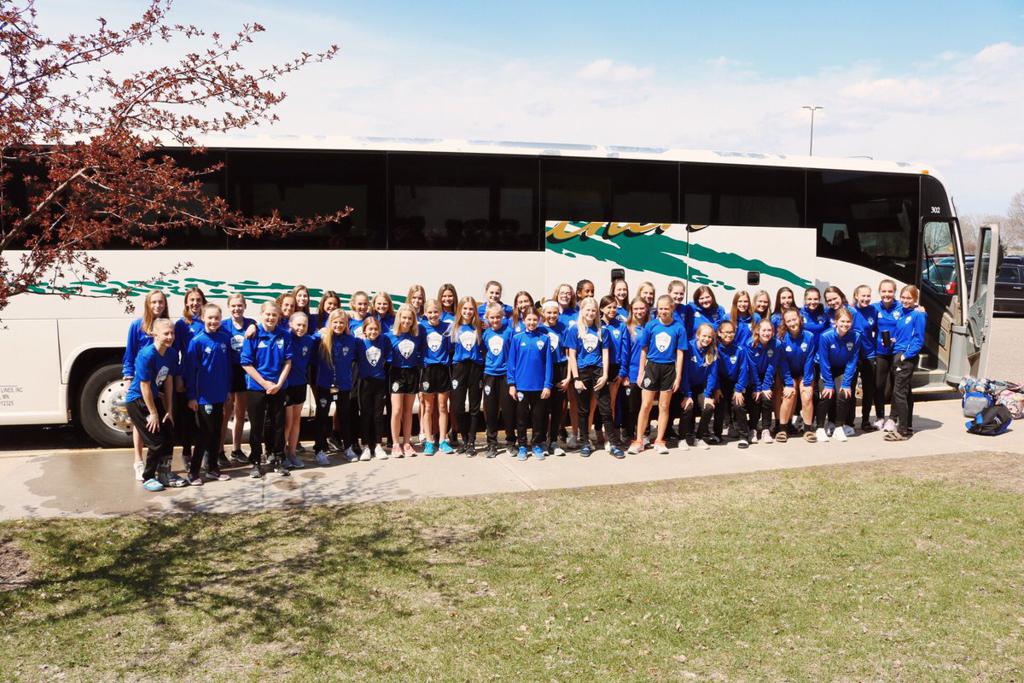 The Blaine Soccer Club 2006, 2005, and 2004 EDT teams drove together on a charter bus down to Des Moines, Iowa to compete in the Just For Girls Tournament last weekend. They were joined by coaches Matt, Mandy, and Tori. The trip began with lots of singing and excitement as the three teams headed south for some sunshine and good soccer, and ended at the hotel with a Chipotle dinner.

Saturday morning, the girls woke up for a morning jog and stretch before heading out for their opening games at 9:40AM. 2006 Girls fell to a tough team from Sporting Omaha, the 2005 Girls tied a good Fusion Select team, and the 2004 Girls fell to a strong Iowa Rush team.

Back at the hotels after the games, the coaches paired up the players from the three different teams by position and had them eat lunch together to get to know one another. In a mentor/mentee type of relationship, the 2004 Girls led the discussion with questions about soccer and life, and shared some of their own experiences about high school soccer and beyond with the younger players.

The cross-team bond that the girls created was immediately felt as the girls cheered each other on in the second games on Saturday.

Against a sunny afternoon backdrop, the 2005 Girls played first and fell to a tough North Branch team, the 2004 Girls tied a fast Eden Prairie team, and the 2006 Girls beat a good Minneapolis United team. After a long day the teams went back and enjoyed a pizza dinner and were fast asleep ready for the championship games on Sunday.

The 2006 Girls entered the semi-finals and had lots of chances to score, but it would take penalty kicks to decide who advanced to the final. Blaine won 4-2 from a few great saves from keeper Abby Newby. The 2005 girls had a blockbuster of a game, being down 1-0 with 10 minutes left and scoring two goals, the game winner scored by Madelynn Huynh with mere seconds left in stoppage time, to beat a good Edina squad. Unfortunately, the 2005 Girls were unable to advance due to the tie breaker rules.

In the last game of the weekend, the 2006 Girls were facing the same Sporting Omaha team that they had lost to in the opener. Fighting through fatigue and injuries, the score was 1-1 at the end of regulation, and the game went immediately to penalty kicks. The score was 4-4 after 5 shooters, so in the sudden death 6th shooter, the 2006 Girls fell in the final.

The bus ride home was much quieter as everyone was tired from competing so hard over the weekend, and everyone was happy to get home to their own beds. Though BSC came home with silver medals, everyone had an amazing trip and enjoyed the experience.